Microorganisms are invisibly small - the Microbe of the Year 2014 is an exception: Nostoc species can be found by attentive walkers on meadows and lakes, looking like round "mare´s eggs" or green-brown "star jelly". These microbes are visible to the naked eye. They need clean water to survive and are therefore an indicator of a healthy ecosystem. They also offer forward-looking approaches for medicines and biofuels. Scientists from the Association for General and Applied Microbiology (VAAM) named this fascinatingly diverse microorganism Microbe of the Year in 2014. 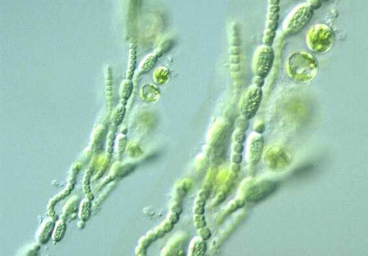 The name Nostoc goes back to the medieval natural scientist and alchemist Paracelsus (1493-1541), who thought the gelatinous shells were a "star snuff" and therefore allegedly combined the English and German words for nostril (Nasenloch) to nost-och. However, the microbe is much older: 2.5 billion years ago the precursors of Nostoc for the first time formed oxygen via photosynthesis and thus provided the basis for our present-day life in an oxygen-rich atmosphere. Nostoc is thus considered the ancestor and precursor of today's plant world.

Living on light, air and water

Nostoc can live on light, air, and water - just like all relatives from the cyanobacteria group. They colonise water bodies and nutrient-poor, barren, stony surfaces and are therefore valuable for the ecology of many habitats. They often form communities with plants, fungi, mosses, and lichens. As classic team players, they live together with the algae fern Azolla in rice fields, for example, where they provide sufficient nitrogen as a natural fertiliser.

On the way to multicellular organisms

Microbes usually live as single cells. But Nostoc went one step forward: many species form chains of cells that have specialised. Some cells in these filaments contain the blue-green pigment chlorophyll - they are responsible for photosynthesis, i. e. the extraction of energy from light, water and carbon dioxide. Others are brownish and are responsible for nitrogen fixation and locomotion. Some form a thick cell wall to survive drought. 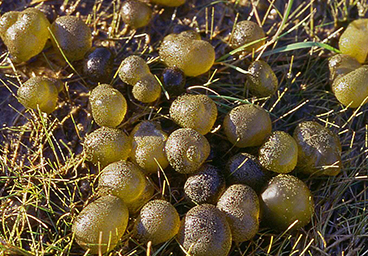 The "mares egg", Nostoc purniforme, lives in clean lakes, ponds and puddles. This species forms a gelatinous shell to protect itself from changing environmental influences. The slime capsules contain several Nostoc filaments, can grow to several centimetres in size and can be seen with the naked eye. They are considered an indicator of an intact ecosystem. Attentive walkers can also spot the species Nostoc commune: Their irregular mucilage shells, up to the size of a hand, are found on barren meadows, soils, and roadsides. They dry into paper-thin, inconspicuous layers and thus survive until the next rain, when they swell up and become visible again. Some cultures use Nostoc as food. In the Peruvian Andes, both the fresh and the preserved forms of Nostoc are considered a valuable food ingredient: "Cushuru" or "Llullucha" ("similar to caviar") is high in protein and rich in nutrients such as the mineral iron. Nostoc is also known as "Ge-Xian-Mi" in China.

Nostoc species provide modern base materials for the pharmaceutical industry: for example, substances against cancer or HIV are currently being developed. Cyanobacteria could also play a role in the production of biofuels in the future. 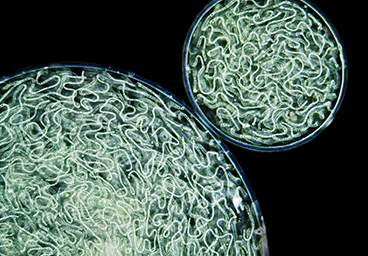