"Nodule bacterium" is the Microbe of the Year 2015, with the scientific name Rhizobium. This microbe facilitates the cultivation of beans, peas, lentils, and forages such as clover.

Bacteria as a natural fertiliser

Rhizobia ("living in the roots") provide certain plants with the ammonium they need to grow naturally and thus replace artificial fertiliser. The typical nodules containing the bacteria are clearly visible on the roots of these plants.

Since humans have been intensively practising agriculture, they have learned to maintain the yield capacity of soils through crop rotation. Legumes such as red clover, lupin, and field beans are the basis for high soil quality as green manures - because rhizobia ensure nitrogen fixation. According to estimates, bacteria bind 170 million tons of nitrogen in the soil and in plants every year, about a quarter of it on agricultural land. Unlike artificial fertiliser, this does not pollute water bodies with nitrates (NO3 compounds) that are formed. Researchers are therefore intensively looking for a way to transfer the cooperation between rhizobia and leguminous plants to cereal varieties. To do this, however, these plants, which are so important for the world's food supply, must learn the "language" how to communicate with nitrogen-supplying bacteria and form root nodules.

Protecting plants from being eaten

New findings show that Rhizobia also play an essential role in protecting plants against predators: Certain defence substances are only produced in the root nodules of the plants, as scientists from Kiel were able to show.

Over 100 years ago, it was recognised that certain plants, the legumes, grow well in soil rich in rhizobia. Today, the worldwide production of over 250 million tons of soy worth 50 billion US dollars would be inconceivable without rhizobia: Already the seeds are inoculated with the related bacterium Bradyrhizobium to ensure growth of the soybean plants. The plant sends chemical signals; the bacteria then penetrate the root hairs, and bacteria-filled nodules develop within a few weeks.

In these nodules, the plants form a red pigment (leghaemoglobin), closely related to the human blood pigment haemoglobin. As in our blood, it ensures that oxygen can be bound. In nodultes, leghaemoglobin is necessary to transport oxygen to the bacteria in a controlled manner and to maintain an oxygen-deficient environment. Only then does the bacteria's special enzyme machinery work - and it can do something that the plant cannot: It converts nitrogen (N2) from the air into ammonium (NH4+). Like all living things, plants need ammonium to produce proteins and components for their genetic material. All legumes - which include soybeans, beans, peas, chickpeas, and peanuts as well as around 18,000 other species - can grow in nitrogen-poor soils thanks to Rhizobium and related bacteria. 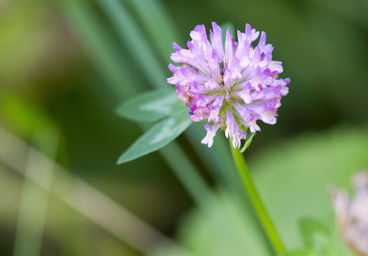 Plant and bacteria: a win-win situation

About 100 million years ago, this fascinating cooperation between plants and bacteria developed. Normally, plants try to prevent the invasion of bacteria. But here, a complex communication system developed with which plants and bacteria communicate in such a way that coexistence is mutually beneficial: The bacteria can reproduce in a protected manner and be supplied with nutrients via the plant; the plant can thus colonise even barren soils. This cooperation is of great ecological and economic importance, as it secures plant diversity from hare clover to trees such as acacia, carob, and rosewood, but also our diet of healthy vegetables and animal feed production.

Rhizobium (and relatives) mainly grow on plants of the legume family (Faboideae):