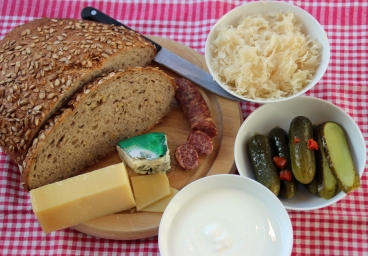 Basis of many foods

Billions of people consume Lactobacillus, the Microbe of the Year 2018, every day: as sourdough bread with cheese or salami, in yoghurt or in the form of sauerkraut, beetroot, pickled cucumbers, or olives. Lactobacilli - translated as "milk sticks" - are part of our cultural history: Around 7000 years ago, settled cattle breeders in northern Europe began to consume more milk and milk products. The enzyme lactase, which is originally only present in infants and breaks down lactose, then remained active in the genome of adult Central Europeans - while most adult Asians, for example, still have a poor tolerance of dairy products today.

People discovered that milk that had turned sour could be useful and delicious: in the form of yoghurt, kefir or cheese, for example. Lactobacillus is mainly responsible for this - as well as for acidification processes for making sourdough bread, sauerkraut, or other pickled vegetables. Lactobacillus forms lactic acid from the carbohydrates present. This raises the acidity so much that harmful bacteria cannot multiply: Food is preserved. About 5000 such Lactobacillus-fermented foods are known worldwide. 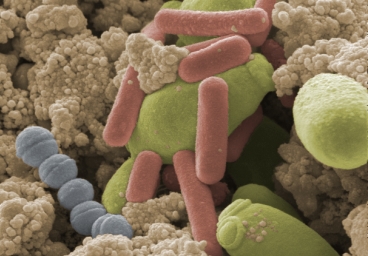 Lactobacillus accompanies us from birth: During passage through the maternal birth canal, the bacteria are transferred to the baby. The lactobacilli protect the newborn from pathogens. In caesarean births, this protection is missing, so harmful germs can settle more easily in the immature baby's intestine. There is evidence that lactobacilli reduce the likelihood of allergies and autoimmune diseases such as diabetes and Crohn's disease.

Lactobacilli perform many other tasks for our health: Thanks to certain enzymes, they make indigestible carbohydrates accessible to humans - especially the dietary fibres from whole grains and vegetables, which stimulate healthy intestinal bacteria in the small intestine. Nowadays, such dietary fibres are added to some foods as "prebiotics", for example in the form of the long-chain sugars inulin or oligofructose. "Probiotics", on the other hand, are food or medicinal products that contain specific strains of bacteria. Whether natural or added: lactobacilli are important for the function of the intestinal mucosa, which transports nutrients from the intestine into the blood and also supports our immune system. If it is disturbed, infections and autoimmune diseases can develop.

Studies suggest that lactobacilli even influence our well-being: Certain Lactobacillus strains reduce anxious and depressive behaviour in mice - possibly because they produce messenger substances that play an important role in nerve transmission in the brain.

Lactobacilli are used biotechnologically to produce lactic acid on an industrial scale - about 500,000 tonnes per year in Germany. As a food additive (E 270), lactic acid increases the shelf life of baked goods, sweets and soft drinks. Soaps, creams and dishwashing liquids also contain lactic acid, which has a disinfecting effect.

By linking several lactic acid molecules, lactic acid chains - polylactides - are formed. Materials made from this are stable but biodegradable, so they are processed into organic films and packaging. Medical technicians use polylactides for suture materials and implants, which decompose in the body after some time. 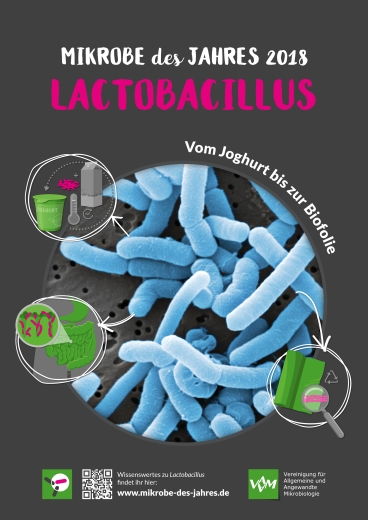