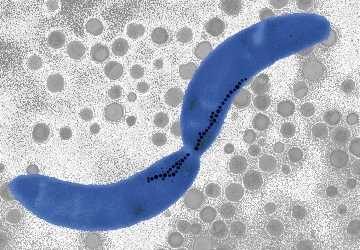 If you hold a magnet to samples of pond sludge it will attract certain bacteria to the magnetic pole. Larger accumulations can even be seen without a microscope. In them, elongated and round, spiral and even multicellular microbes become visible, which swim specifically to the magnetic pole. Magnetospirillum, the Microbe of the Year 2019, owes its name to its magnetic sense and its sinuous shape.

When the Italian Salvatore Bellini first described magnetic bacteria in 1963, he met with disbelief. It was only twelve years later that the American Richard Blakemore was able to confirm his fascinating observations by electron microscopy: He saw chains of magnetic crystals in microorganisms from mud samples. They align themselves in the magnetic field like a compass needle. Blakemore called the magnetic particles "magnetosomes" and the swimming movement of the cells aligned with the magnetic field "magnetotaxis".

Together with an oxygen sensor, magnetospirils thus orient themselves in the water: they specifically seek out layers of water with the low oxygen content suitable for them. The magnetic poles of the earth help them to do this. Other functions are being discussed: For example, the magnets could serve as an internal "electrochemical battery" for energy generation. 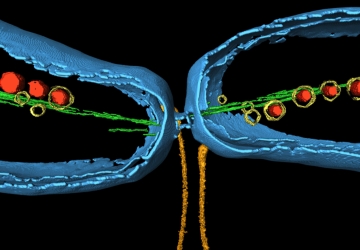 Special enzymes transport iron ions from the environment into the bacterial cell. The iron concentration can reach up to five percent of the dry weight of the cell. Chains of 15 to 30 iron oxide crystals form, which together act as a magnetic compass needle. A cell skeleton made of long protein threads - similar to the actin fibres of our muscles - holds the crystals in the centre of the cell and sorts them evenly during cell division.

A laboratory at the University of Greifswald was already working with magnetic bacteria before German reunification. There, they succeeded in isolating a magnetic bacterium that was much easier to breed and, above all, to manipulate genetically. The wall came down - and the bacterium was described in Munich as Magnetospirillum "gryphiswaldense" (Latinised for "Greifswald"). Many fundamental insights into the biosynthesis and function of magnetosomes were gained from M. gryphiswaldense and close relatives, which can be cultivated in the laboratory and genetically manipulated. Thanks to the detailed knowledge of the biosynthesis and function of magnetosomes, Magnetospirillum is now also considered a model organism for studying the formation of bacterial organelles.

As studies with modern molecular-biological methods show, the ability to form magnetosomes is widespread. It is also found among other bacterial species. Similarities with the magnetic sense of animals - such as migratory birds, salmon, or sea turtles, which also orient themselves to the earth's magnetic field - have hardly been investigated yet. It is possible that, similar to bacteria, tiny crystals of an iron mineral play a role - along with other mechanisms. 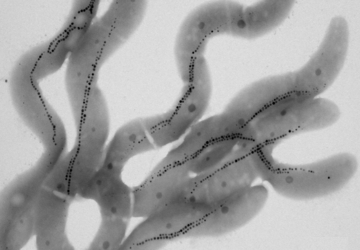 Attractive for technology and medicine

Magnetospirillum offers fascinating possibilities for biotechnological applications: The tiny magnets have a uniform size, shape, and high magnetisation that synthetic nanoparticles cannot match. Foreign molecules coupled to the magnetosome particles can give them additional useful properties. Researchers have developed a kind of "construction kit" to create magnetosomes with new functions. For example, particles with coatings of silicates or spider silk proteins with improved surface properties have been obtained.

In laboratory experiments, isolated magnetosomes clearly outperform the effectiveness of commercial magnetic contrast agents; this makes them interesting for magnetic resonance imaging (MRI) or imaging procedures in research and medical diagnostics. Magnetosomes also generate heat in cells or tissues when a strong magnetic field is applied - in animal experiments, this has been used to shrink tumours. Researchers were able to transfer the complete biosynthetic pathway from Magnetospirillum into foreign bacteria. In this way, it may be possible to artificially magnetise cells and "control" them accordingly. Living magnetic bacteria have already been tested as microrobots.