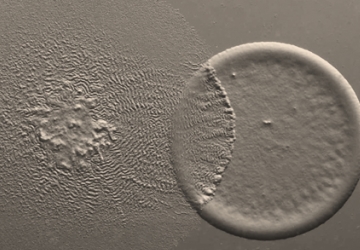 Myxococcus hunts in a shoal

They congregate in hundreds of thousands, besiege the victim, and finally destroy it: Myxococcus xanthus is a hunter that is active in groups and feeds on other bacteria as a food source. To do this, the tiny rod-shaped bacteria have to communicate with each other and coordinate their behaviour. This fascinating bacterium, which lives in a social association, was chosen by the Association for General and Applied Microbiology (VAAM) as Microbe of the Year 2020.

When food is scarce, Myxococcus xanthus lurks sheltered for better times: Countless cells come together in order to form a spherical cluster as a mushroom-like yellow fruiting body. The slender, rod-shaped cells turn into round spores that can survive periods of hunger and drought. The bacterium owes its name to the fruiting body and spores: The fruiting bodies are yellow (Greek xanthos), the spores are spherical (coccos), and the cells produce a mucus (myxa) that holds the community together. However, the majority of starving cells dissolve and serve as a food source - cannibalistic suicide for the survival of the population. A small portion of rod-shaped cells remains outside the fruiting body and helps to identify new food sources. Once the inhospitable state is over, the remaining rods and spores of the fruiting body form active cell communities again, which swarm out to prey once more. 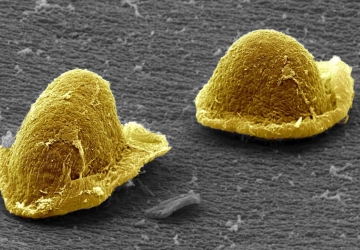 The soil-dwelling Myxococcus xanthus is a prime example of social coordination among unicellular microorganisms. This requires precise communication between the cells. Various signaling substances and complex reception systems ensure coordination between neighbouring cells in a way that even microbiologists had hardly expected from their tiny research objects. The collectively formed fruiting body can almost be seen with the naked eye: The spheres reach the thickness of a sheet of paper. Related myxobacteria form even larger tree-like structures as thick as a fingernail.

Moving by pulling and sliding

Individual bacteria can move in two different ways: On the one hand they use hair-shaped appendages (pilus) made of thousands of protein subunits. Each individual pilus can elongate, attach to surfaces and then shorten again. This creates a force that pulls the cell forward. On the other hand, the bacteria can glide. In doing so, they attach themselves to the substrate with the help of protein complexes. These protein complexes are formed at the front cell pole, bind to the substrate and then migrate to the rear end of the cell. In this way, the cell pushes itself forward. Both mechanisms of movement repeat continuously, thus advancing individual cells and large groups of cells in a coordinated manner. "It is fascinating to observe the different movement patterns of M. xanthus in the predatory swarming colonies and during fruiting body formation," says myxobacterial researcher Anke Treuner-Lange from the Max Planck Institute in Marburg. 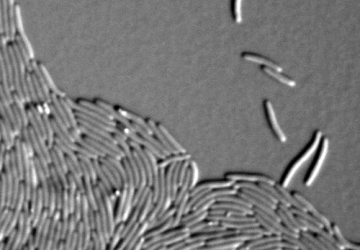 Myxococcus xanthus posseses one of the largest bacterial genomes, with almost ten million base pairs. Their elaborate way of life also leads to myxobacteria producing many biologically active substances, including antibiotics to kill their victims and messenger substances for communication. More than 130 such secondary metabolites (substances that do not directly serve metabolism) have been described in the meantime.

As in a construction kit, myxobacteria assemble various small molecules into complex substances. These include, for example, the characteristic yellow dyes (DKxanthenes), which play an important role in the development of spores into active cells. A volatile substance, Geosmin, is responsible for earthy smell typical of M. xanthus.

Myxobacteria are becoming increasingly interesting as a source of new antibiotics and therapeutics. The recently discovered Corallopyronin could become a new broad-spectrum antibiotic. The genetic blueprint from another myxobacterium was cloned into the model bacterium M. xanthus to produce enough Corallopyronin to study its efficacy in more detail.

Already on the way to drug development are antibiotically active substances from the related myxobacterium Cystobacter. These Cystobactamides prevent the correct unwinding of bacterial DNA, which is necessary for replication. Myxobacterial active substances against cancer, viruses and in plant protection against fungal diseases are also currently being researched.